English defender Kyle Walker-Peters, 23, is on the brink of leaving Tottenham for £12m after agreeing personal terms with Southampton, where he spent the second half of last season on loan. (Sunday Mirror)

Arsenal are stepping up their search for a new goalkeeper to cover Emiliano Martinez as they seek clarification on how long usual first choice Bernd Leno will be out with a knee injury. (Sun on Sunday)

Leicester and Liverpool are interested in Olympiakos and Greece left-back Kostas Tsimikas, 24, who could be available for £12m. (Mail on Sunday)

Borussia Dortmund will offer England winger Jadon Sancho, 20, a new deal and a significant pay rise if Manchester United do not meet their £100m valuation by 10 August. (Bild – in German)

Crystal Palace are set to miss out on English forward Eberechi Eze. QPR want £20m for the 22-year-old but the Eagles only value him at £10m. (Sun on Sunday)

Barcelona and Brazil midfielder Philippe Coutinho, 28, who is currently on loan at Bayern Munich, will not make any decision on his future until this year’s Champions League is over. (Sport)

Arsenal want to spend £100m on Real Madrid midfielder Dani Ceballos, 24, Atletico Madrid midfielder Thomas Partey, 27, and Lille defender Gabriel, 22, this summer but need to sell players in order to do so. (Sun on Sunday)

Newly promoted West Brom have held talks with Brighton over a deal for Republic of Ireland defender Shane Duffy, 28. (Mail on Sunday)

The Liverpool board has told boss Jurgen Klopp to sell players such as Guinea midfielder Naby Keita, 25, to fund a move for Bayern Munich and Spain midfielder Thiago Alcantara, 29. (Kicker – in German)

Benfica are hoping to sign Uruguay striker Edinson Cavani. The 33-year-old is a free agent after his contract at Paris St-Germain ended. (Benfica TV, via L’Equipe – in French) 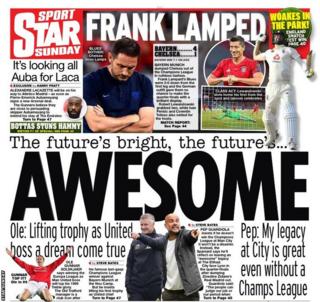 The back page of the Star Sunday