Arsenal have made a three-year contract offer to Chelsea and Brazil winger Willian, 31. (Sky Sports)

Arsenal are leading the race to sign Lille and Brazil defender Gabriel Magalhaes, 22, ahead of Manchester United, Everton and Napoli.(La Voix du Nord via Daily Star)

Chelsea have prioritised the signing of £60m-rated Uruguay defender Jose Gimenez, 25, from Atletico Madrid after being priced out of a move from West Ham’s England midfielder and centre-back Declan Rice. (Daily Star)

Barcelona keeper Marc-Andre ter Stegen is set to sign a new five-year deal at the Spanish club. That will disappoint Chelsea, who were monitoring the 28-year-old Germany international’s contract situation. (Mundo Deportivo via Sun)

Tottenham are ready to sell £35m-rated right-back Serge Aurier, with AC Milan and Monaco both interested in the 27-year-old Ivory Coast international. (Mirror)

Crystal Palace have offered a contract to Scotland winger Ryan Fraser. The 26-year-old is a free agent after leaving Bournemouth. (Guardian)

Fulham are ready to make their own offer to wreck Southampton’s £12m move for Tottenham full-back Kyle Walker-Peters, 23, who was on loan at St Mary’s last season. (Evening Standard)

Everton and Wolves have been linked with a move for Barcelona’s Brazilian midfielder Rafinha, 27, with the Catalan club holding out for a price matching his release clause of £14.5m. (Sport, via Sport Witness)

Tottenham are considering a move for Brentford and Algeria winger Said Benrahma, 24. (Mirror) 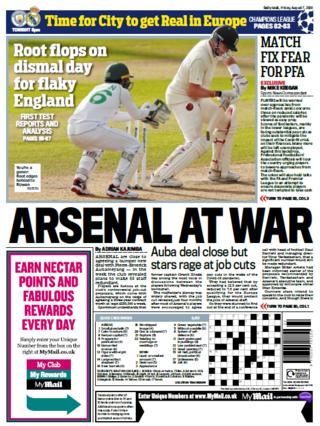